How do we make electricity from the energy of the sunlight?

The working principle of a solar cell is based on the so called photovoltaic (PV) effect: the generation of a potential difference at the junction of two different materials (the solar cell) in response to electromagnetic radiation (the sunlight).

How much electricity we can obtain, is related to the amount of energy that the sunlight contains. This depends on the characteristics of the sunlight. The sunlight contains many different colors that together make up the solar spectrum. Each color has a particular wavelength and energy. An alternative way to look at light is to consider it as a stream of particles, called photons.

By combining multiple solar cells, we create a solar module. Solar modules are then used to build a so called PV system. While the solar modules produce the green electricity, this electricity usually needs to be transported, stored or converted before it finally can be used. For this, we need extra devices in our PV system. These additional devices of a PV system vary depending on the desired system configuration. Two main configurations are grid-connected and stand-alone systems. 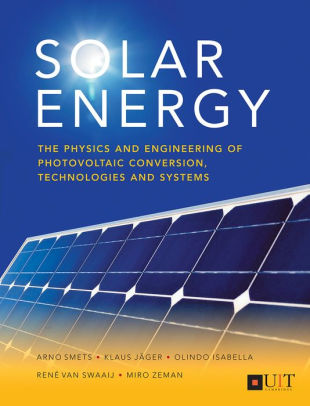 The TU Delft book on solar energy, covering the steps from wafer manufacturing to PV system design, can be downloaded for free as an e-book at one of these websites: Amazon.com, Barnes & Noble and Rakuten Kobo

How much energy does the sunlight contain?

Radiation from the sun can be seen as a series of particles travelling through space, called photons. The level of energy associated with each photon depends on its wavelength. The photons emitted from the sun at different wavelengths are represented in the solar spectrum as shown in Figure 1. 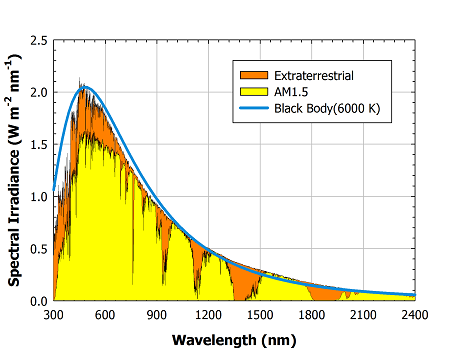 The extraterrestrial radiation (the orange area) represents the effective solar radiation emitted from the sun in the outer space. When the radiation reaches the top of the Earth's atmosphere and starts travelling towards the surface it is absorbed and scattered by elements present in different atmospheric layers (mainly ozone, water vapor and carbon dioxide).

The phenomenon of absorption of the electromagnetic radiation consists of the transformation of incoming electromagnetic energy into the internal energy of a molecule by bringing the atoms into states of vibration. Different molecules are excited at different wavelengths, thus the absorption is wavelength selective and causes gaps and discontinuities in the spectral curve at the Earth's surface (yellow area in Figure 1). The extent of attenuation of the incoming radiation is proportional to the length of the path that the radiation travels through the atmosphere before reaching the ground. This attenuation is expressed by the Air Mass (AM) coefficient. The longer the path, the greater the absorption and the weaker the incident solar radiation.

Solar radiation reaching any object on the Earth's surface can be divided into three main components:

(1) Direct radiation: travels directly in a straight line from the sun. On clear-sky days, this component is the main contributor to the photovoltaic energy generation in solar devices.

(3) Albedo: reflected from the Earth's surface. This component is a function of the reflectivity of the ground and it becomes more intense in the proximity of highly-reflective surfaces such as snow or water.

How is the electricity produced?

When photons are absorbed by the material (of the solar cell), they can excite its lattice and generate oppositely charged particles (charge carriers). This phenomenon takes place only if the incoming photon can overcome a certain energy threshold, which depends on the specific material the cell is made of. The free charged particles are then separated from each other and collected by an external circuit. The flow of particles through the external circuit generates an electric current.

Commonly, when an incoming photon has sufficient energy to excite an electron in the cell lattice, it generates a couple of free charge carriers known as an 'electron-hole pair'. These charged carriers are free from any bond with the lattice.

To generate a current, the carriers are initially separated into different regions of the cell using an internal electric field created at the junction between two differently doped semiconductor materials.

The separated electron-hole pairs are then collected at two contacts. The flow of the free electrons through the external circuit creates a current that generates the green electricity. A typical current vs. voltage characteristic of a solar cell is shown in Figure 1 (the red line). 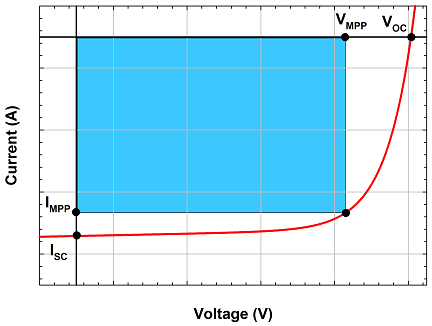 Fig. 1 - Current vs. voltage characteristic of a typical solar cell

Figure 1 shows that there is a point at which the output power is maximum, corresponding to Impp and Vmpp. The working point of the cell is therefore usually calibrated to be as close as possible to this maximum power point.

What type of solar modules are there?

Since the electricity output of a single solar cell is fairly low, multiple solar cells are usually connected to form solar modules, arrays and strings. By varying the configuration connection between components, the current and/or voltage output can be increased, thus raising the final power of the PV system.

As previously explained, the generation of a photovoltaic current begins with the absorption of incoming photons inside the particular semiconductor material the cell is made of. There are many materials available for manufacturing solar cells. Different materials correspond to different technologies and cell characteristics. Understanding the basic properties and advantages each technology offers helps in choosing the right solutions for the desired installation. Among the many technologies available, the Dutch PV Portal focusses on the following technologies that dominate the market: Crystalline Silicon technology, Thin-film silicon technology and Thin-film Copper Indium (Gallium) Diselenide (CI(G)S) and Cadmium Telluride (CdTe).

From cell to module

With the promise of drastically reducing PV module production costs, due to reduced material use and a less intensive manufacturing process, thin-film silicon technology has represented a very interesting alternative to the well-established crystalline silicon during the last decade. Thin-film silicon can either be deposited on rigid glass substrates as well as on flexible, lightweight and less costly plastic materials. One of the major barriers to the development of this technology is the light-induced degradation to the material, which reduces operational performance. Following initial growth, thin-film silicon technology now seems to be facing a decline in production over the past few years [1].

As with thin-film silicon technology, CI(G)S and CdTe modules can be deposited over a large substrate area thus lowering manufacturing costs. In contrast to thin-film silicon, however, these two technologies do not suffer markedly from light-induced degradation and can achieve higher stable efficiencies during their operational lifetime. Both technologies are expected to steadily increase their market share in the PV industry thanks to a rapid increase in registered conversion efficiencies [2].

What components does a PV system contain?

Although solar panels are the heart of a PV installation, they only represent one of the many components of a complete PV system. The energy produced in the panels is transferred to the load or to the local electricity grid through the Balance of System (BoS). The BoS is made of all the components, with the exception of the panels, that together form what we call the PV system. Most PV systems contain at least the following BoS components: Mounting structure, Wiring & cables, Inverter, MPPTracker In stand-alone systems, there is no connection to the electricity grid, thus extra BoS components are needed: Storage device, Charge controller.

A grid-connected system connects to the local electricity grid. It therefore gives and takes electricity by interchanging with the national grid and does not need to be energetically independent. By contrast, a stand-alone system is designed to be energetically self sufficient. Due to the intermittent nature of solar radiation, this configuration requires a carefully designed storage facility to store and release energy when required. 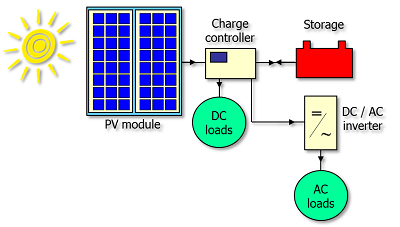 The mounting structure is made of all the parts that support a module above the ground or attach it to a surface such as a roof or building. In more sophisticated systems, the mounting structure can also function as a sun tracking device. The sun can be tracked by either following its elevation in the sky or its azimuth (the path from when it rises in the morning to when it sets at night). Solar trackers can be either single or dual axis depending on the complexity of the system. The addition of the moving tracking parts might however increase costs due to additional maintenance and possible replacement during the lifetime of the system.

Wiring and cables connect the various components of the system together and transmit the power produced between them. Losses in cables due to heating will reduce the efficiency of the entire system and must therefore be minimized by choosing cables of a sufficient cross sectional area and by reducing the distance between energy production and utilization.

PV modules produce direct current (DC) electricity. Most household appliances and the electricity grid are however powered using alternating current (AC). Most of the power produced therefore needs to be converted from DC to AC. This conversion is performed inside a component called an inverter. Inverters are designed to convert DC to AC electricity and to operate a PV system continuously and closely to its maximum power point. This latter requirement is performed using a Maximum Power Point Tracker (MPPT) that interactively adjust the working point of the modules to closely match the maximum in the I-V curve. Efficiency values for modern inverters generally range from around 90% to 96% for full load operation for PV applications [1].

In the case of grid-connected inverters, further requirements are posed regarding the quality of the current injected to the grid and the monitoring of grid voltage, waveform and frequency. In case of a grid failure, the inverters need to disconnect automatically for safety reasons.

Most renewable energy technologies are referred to as 'intermittent' since they are able to produce electricity only when the primary source is available. To design an independent stand-alone PV system, therefore, an adequately sized storage facility is essential to be able to meet power requirements at all times. The most common storage system currently in use is a rechargeable battery stack that stores and releases electricity depending on production and demand. The most widely used type of batteries for PV applications are lead-acid batteries [1]. The cost of the battery stack usually substantially increases the cost of the system, especially for large-scale applications.

What determines the efficiency of a solar module?

The process of creating electricity from sunlight involves multiple energy-conversion steps. In each step, a part of the energy from the incident sunlight is lost. Energy losses can also be expressed as an efficiency*.

While often only the STC efficiency of a PV module is noted, it is interesting to look at the efficiency of the whole PV system. So what determines this overal system efficiency? These are:

*A 20% energy loss means an energy efficiency of 80% (=100%-20%). The PV system efficiency is the final electrical energy output divided by the sunlight energy input. This efficiency is always lower than 100%.